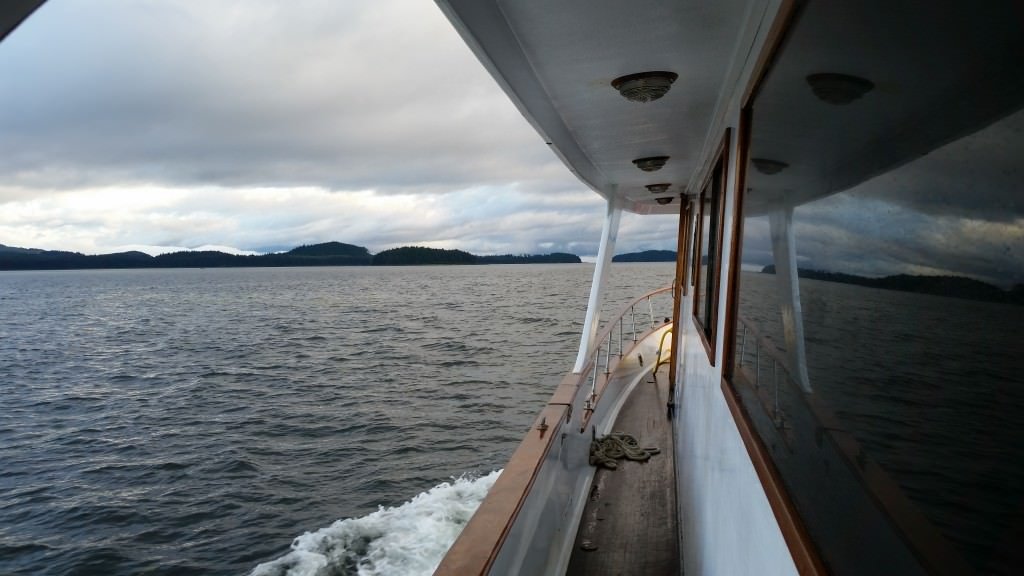 20 JulRescuing An Anchor During A Diving Trip To Chatham Inlet 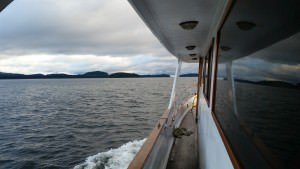 This news post comes on the heels of the most recent tragedy: Wings flight 202 that crashed mid-flight from Juneau to Hoonah, Alaska on July 17, 2015. The pilot, Fariah Peterson, lost her life trying to save the lives of the other passengers on board and the four remaining people on the flight survived. We mourn the loss of Pilot Fariah and our hearts go out the first responders and the other survivors on flight 202. Life in Alaska can seem glamourous to people that live in the lower 48 states, but in reality, it’s a very harsh environment. There are a lot of people that come to Hoonah, AK expecting adventure and find it while others come to Hoonah/Icy Straits expecting to find adventure and don’t find it. It’s about perspective. Unpredictable weather, extreme tide fluctuations, and travel restrictions are recipes for disaster as can be attested by the most recent disaster here. There’s always something to watch out for. But Alaskans are heart-felt, true friends that you can count on when you might need help, no matter what.

Recently, one of Hooked Adventures’ good friends, The Northern Dream, lost their anchor in Chatham Inlet and Herminio Ramos from Hooked Adventures went on a diving excursion to retrieve it. Alaska can be unforgiving at times, and it’s important to understand this when traveling here for any type of charter fishing excursion, float plane sightseeing trip or any other Alaskan adventure. The Northern Dream made all the preparatory requirements to secure their anchor, adjusted the buoys to float it, but nevertheless they still lost it. (We’ll spare you all the tiny details how this happened.) Things like this occur no matter how prepared you are. The key to living in Alaska is not being prepared for every possible scenario (because there’s a million of those); the key to living in Alaska is gaining experience on how to handle situations, regardless of what that particular situation is. It’s a mind-set, not a skill-set.

The day started at 5:00 am in Hoonah, Alaska. The Northern Dream Alaskan Yacht Charter was fueled up and ready to go and tied up on the Hoonah City Docks. The weather was a cool 55 degrees, and visibility was good with a light fog in the air. We departed about 5:30 am and headed south/southwest towards Chatham and Chatham Inlet. It’s about 45 nautical miles from Hoonah to where the anchor was lost, so the trip was to take about 4 -5 hours. The Northern Dream is a spectacular yacht with full amenities and a great crew of three. Although this was a work trip, we were treated with awesome hospitality which we thoroughly enjoyed. Captain Jim was aboard, with deckhand Marisa and Chef Rob. There was also a special guest on board from Washington State as well. We were packed and ready.

We passed beautiful mountain scenery and gorgeous waterfront properties all along the way. Float planes flew overhead as we passed through a fleet of salmon seining fishing vessels, leisurely navigating around them. The water was calm and all aspects of the trip were relaxing. We even saw a killer whale (orca) bull as we approached Chatham and Chatham Inlet! It was awesome. 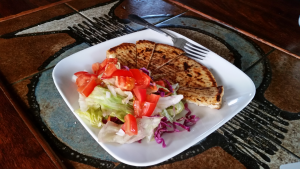 About an hour before we made it to the site, we were served an awesome Asian-inspired meal prepared by professionally-trained Chef Rob. It was very delicious; cashews and croutons were littered throughout the dish which made the texture perfect. The cabbage stir fry was topped with a perfectly-cooked halibut filet and drizzled with a reduction of some sort. Chef Rob is also a very kind individual and serves everyone on board the Northern Dream with great hospitality.

When we arrived on site at about noon, we dropped the make-shift anchor and immediately got to work. All the necessary gear was assembled: regulator, wet suit, tanks, dive watch, flippers and all the other vital pieces. After all the gear was assembled, Herm began suiting up. Meanwhile, the deckhand and others began lowering the small zodiac into the water using a crane. Captain Jim and Herm discussed the dive site once more and double-checked the GPS to make sure we were in fact sitting on top of the lost anchor. When everything was just right, Herm dove in. 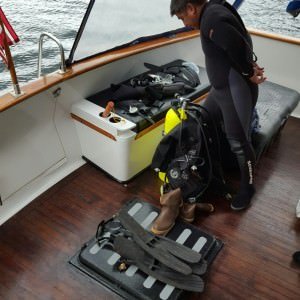 The timer on board was set and we tracked bubbles as Herm started his grid pattern in search of the anchor. Moon jellies and lion’s mane jellies were present on the surface, but not in great numbers so the folks on board didn’t know the condition of the jellyfish swarm in deeper waters. Herm was given 100 feet of line with a small, white buoy attached to the opposite end so that when/if he found the anchor, he could attach the rope to the anchor and come back to the surface. All were anxious on board as we watched bubbles in anticipation of Herm’s return. Five minutes turned into 10, then 15. We waited. At one point, Herm’s bubble trail went under the boat so we all knew that he wasn’t having any success in finding the anchor. At the 20 minute mark, Herm surfaced off the port side of the boat with no luck. The zodiac went to pick him up and bring him back.

Herm discussed the conditions under water; visibility was 5-10 feet, jellyfish were everywhere, and the bottom was muddy. Not ideal conditions for diving. After some discussion, it was determined that the boat’s position would be adjusted one more time to try and pinpoint the anchor’s exact location and Herm would try one more time by descending the anchor line coming from the bow, all the way to the bottom. We needed to wait an hour before Herm could dive again. On the next dive, Herm jumped in and swam to the bow. With buoy line in hand, he began descending immediately. This was much more focused and we all felt confident that Herm would find the lost anchor. Twenty minutes after the second dive time, Herm surfaced with nothing. Nada. Zilch. Zero. We were disappointed. Herm was shuttled back to the back and gave us a run-down on the conditions of the water this time. “It’s cold, really cold, down there,” Herminio said. “At 126 feet, I reached bottom and it’s nothing but thick mud; I looked behind my fins and I was kicking up a thick cloud of debris. These conditions are not favorable for finding your anchor unless a diver spends hours down there, and even then, you might not find it.” Although we were all disappointed, we understood that diving in these conditions are dangerous. As it turns out, the buoy line got tangled around the dropped anchor line about 60 feet. Herm had to come up and untangle it, which wasted precious time and oxygen. A tangled line could be disastrous for a diver and we all knew it.

After some time, one of the crew members took off on the small zodiac boat to a nearby village to ask if they had some type of contraption that we could use to troll for our lost anchor by hand. Our last and final attempt at retrieving the anchor was by passing over the area while dragging two, small anchors along the ocean floor. We attempted this for about 30 minutes. No luck. The lost anchor would remain forever lost, somewhere on the bottom of the ocean floor.

Despite the loss of the anchor, we all decided it was best to stay anchored down there overnight, instead of boating it all the way back to Hoonah. The boat was prepared for the evening, dinner was served, and we all spent the rest of the night watching movies and enjoying good company. The next morning we pulled all the gear and began the typical routine of setting sail. We were back on the water and headed back to Hoonah by 8:30 am. The rain didn’t let up the entire time we were on our way back to Hoonah, and as we passed the canal that leads to Juneau, you could get a visual of the mountainside that Fariah Peterson lost her life on, while trying to save the lives of others.
What’s the lesson here? The lesson is that no matter how prepared you think you are in Alaska, you’re never going to be 100% completely ready for every situation like The Northern Dream discovered, like those on board Flight 202 discovered, and like Herminio Ramos discovered when diving for a lost anchor. There are unknown variables that you’ll encounter on your trip to Alaska, and in order to be prepared, you must expect the unexpected. So if you’re looking for adventure, you will find it here, in Alaska.